The Fire Service have given a  talk to Year 5 this week about fire safety in the home.  They gave clear messages about how to keep safe and to avoid risky behaviours.  The Fire Service then spoke to Year 2, as part of their Topic ‘Superheroes’.  They answered lots of questions prepared by the children.

It’s been a busy final week of the half term in school. Teachers from  schools across the Gower visited us on Monday to undertake a learning walk in our Foundation Phase.   It was a positive visit and nice to share our practice.   In addition, a Read, Write, Inc Development day took place on Tuesday.   Our consultant Rhianwen Ashford analysed pupil progress data, monitored provision and held a master class for staff.

The rugby teams played against Parkland School on Tuesday afternoon.   All the children played with great commitment and the skill level was very high.  Both sides scored some fantastic tries and tackled with great gusto!

Year 3LC held their Family Assembly this morning.  The Assembly  was based on their Topic of ‘Natural Disasters’.  It was a cracking Assembly. The children performed a song about the Water Cycle and shared some wonderful creative writing and poetry they had written.  They also shared which item they would choose to take with them if they were caught up in a disaster zone and had to leave home.

Thank you to the parents who attended our school performance meeting last night to hear about how the school is progressing on its journey of improvement.  There were about thirty parents in attendance.  We shared performance data and talked through the categorisation process.  We touched upon the challenging context we have been operating in, including financially, and what the priorities are moving forward.   Many of the parents who attended have commented that the meeting was informative and beneficial.

One priority is to strengthen parent voice in the school.  We will be setting up a parent forum after half term.  The forum will consist of one parent per year group and will meet with school leadership regularly to offer a parental perspective on aspects of school strategy and provision.  This group will sit underneath the Governing Body and their contributions will feed into decision making at the school.  We will be inviting applications from parents to sit on the forum after half term.

Another date for your diary is the next P.T.A./Community School Grounds’ Improvement morning on Saturday 4th March, 10 a.m. – 1 p.m.

Thank you for your continued support this half term and we wish you all a happy half term holiday. 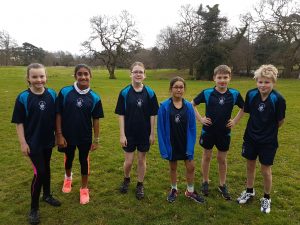 Last night the Cross Country Team ran at Singleton Park against other Swansea schools. They performed really well.  A big congratualations to Caitlin, who achieved 1st place in the girls’ event and to Morgan, who achieved 2nd place in the boys’ event.

Well done to you all.

The third race will be in March. Date TBC. 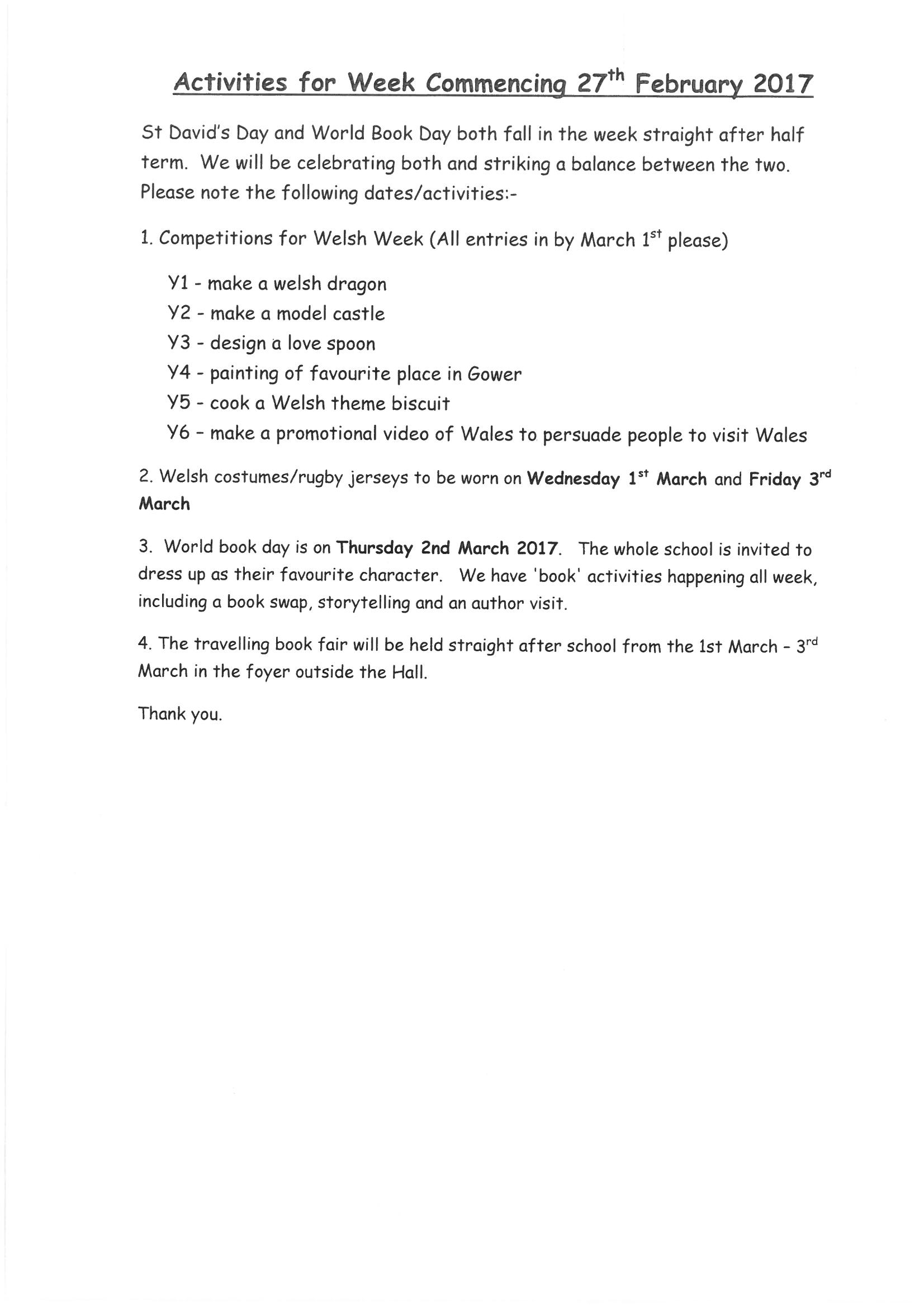 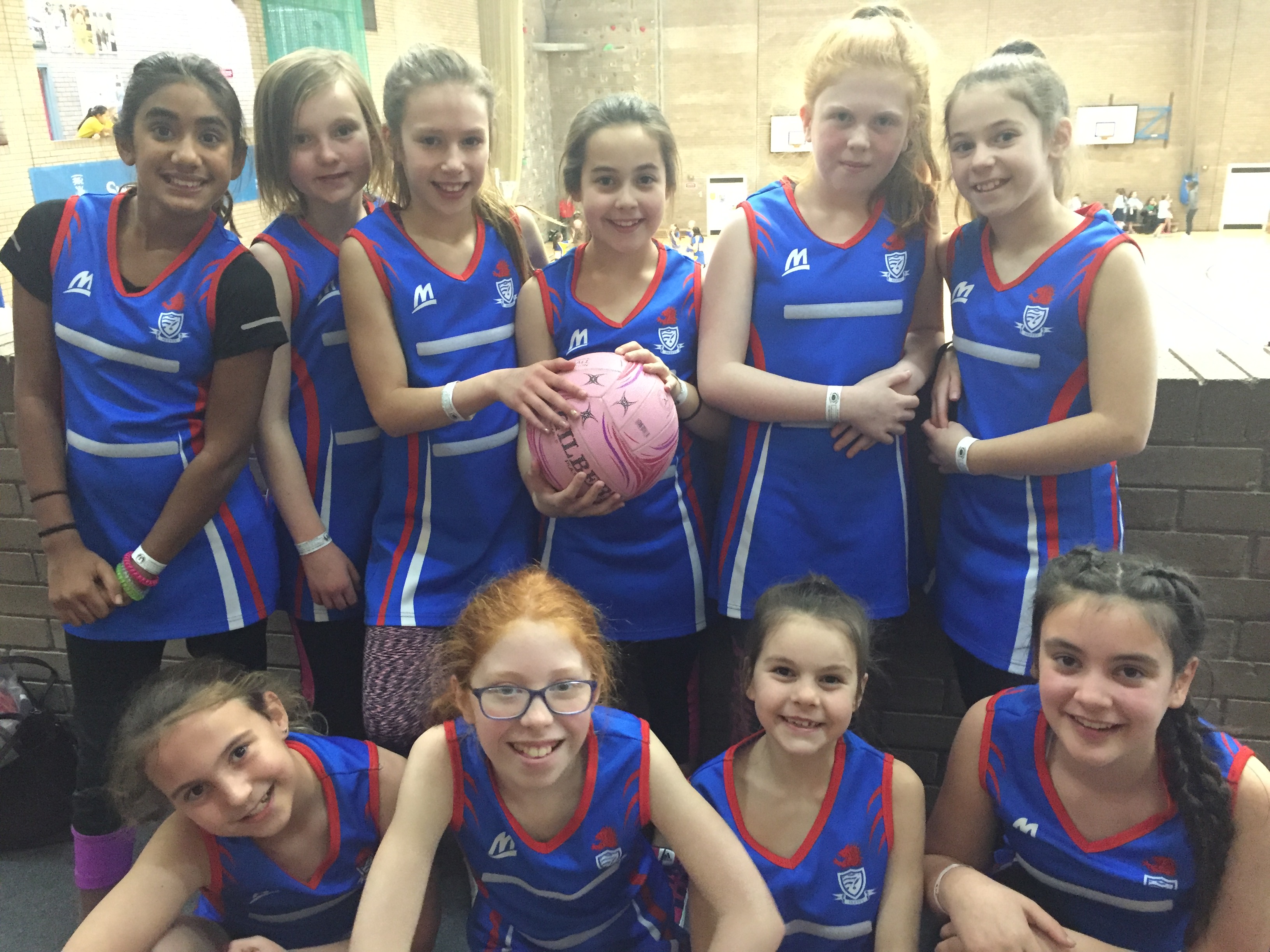 The girls put in 100% to every game and learned a lot. Unfortunately the results didn’t go our way this time but the girls should be really proud of their performance. Big thank you to Alison Brown for umpiring.

Year 4 visited the Liberty Stadium on Tuesday as part of their Ospreys Education project.  The children had digital tasks to complete at eight different stations, all focussing on developing their Literacy, Numeracy and ICT skills.  They went into the changing rooms, the press room and saw the trophy cabinet and jerseys in the Riverside Lounge.  In addition, they sat in the dug out and ran onto the pitch.  It was a super learning experience and all the children behaved impeccably.

Year 4LJ held their Family Assembly this morning.  The children presented on the work they have been carrying out about the brain and how we learn.  They spoke, sang and danced really well.  The many visitors in attendance enjoyed the Assembly very much.  It was a lovely occasion.

Year 2 are  undertaking weekly ‘Kerbcraft’ activities.  Our thanks to the parent helpers who give up their time generously to support the children and providers with the activities out on the pavement and road.    In addition, the R.S.P.B. worked with Year 2 this week, carrying out a bird watch.  The children will be using the live data they gathered in their mathematics.   The R.S.P.B. will also be delivering the topic ‘Give Nature a Home’  to each junior class in the school grounds in March.

Year 6 visited Olchfa School this morning to watch the dress rehearsal of their forthcoming show ‘Oliver’.  The children and staff enjoyed the performance very much.  It was lovely to pick out the ex Sketty School pupils, like Oscar Wood and Eve Jones,  who were performing  so well.

The Netball team have been at a festival in Swansea University today.  Thankfully, it was indoors!  The girls enjoyed playing four matches and were extremely competitive in all their games.

Mr Stewart Mackinnon has secured another term of office as Parent Governor.   Also, we are in the process of creating a Governor Picture Board  to promote with parents who the members of the Body are and which committees they sit on.

Lots of the children are very enthusiastic about raising money for charity.  They are showing very good entrepreneurial skills in setting up stalls and selling produce at break times.  The group led by Georgia Weston recently raised a fantastic £80 for Cancer Research.

The Fire Service will be giving a safety talk to Years 2 & 5 next Monday.  Year 3LC will be holding their Family Assembly on Friday morning.

We break up for half term  next Friday.

Have a lovely weekend and enjoy the rugby! 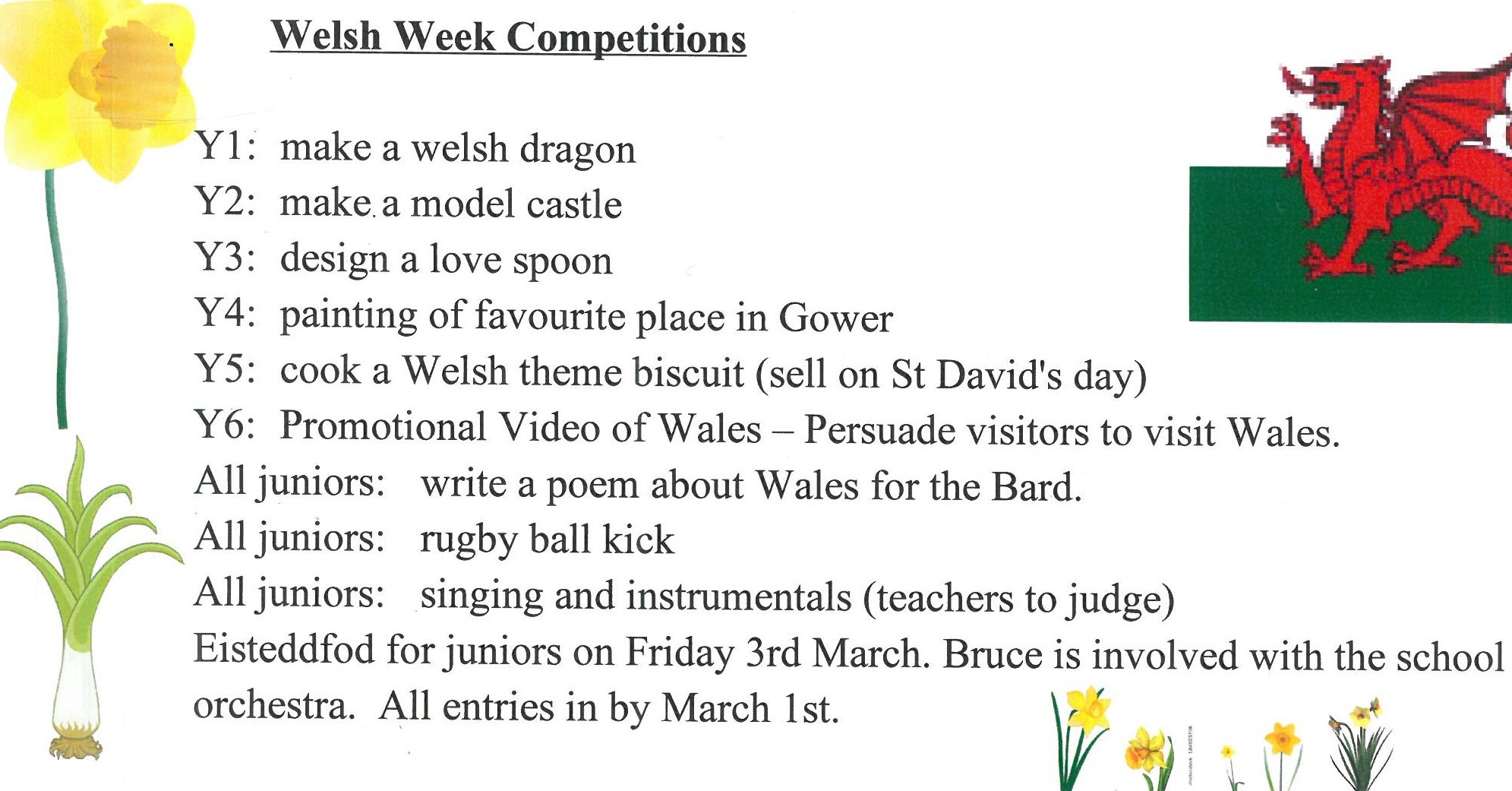 If you shop in the Co-op you can register for a Co-op card and nominate Sketty Primary School PTA to receive 1% of everything you spend on co-op branded products whilst also receiving 5% for yourself.

We only have until March to collect funds so please spread the word to you classes, friends and family and tell them not to forget to nominate Sketty School PTA as your chosen local cause! Every penny raised goes straight back into the school.

A huge thank you to the big band of parents, school staff and Co-op staff who gave so generously of their time  to clear and tidy up parts of the school grounds and paint the Year 1 fence last Saturday.   It was an outstanding effort and much was achieved.  It was a case of ‘many hands make light work’.  The KS2 children will now be taking part in a design competition for the area by the car park.  We look forward to seeing what ideas they come up with and turning the winning design into reality.

Year 6JM held an E-Safety Family Assembly last week, whilst  Year 4MW held their Family Assembly this morning.  Their Assembly was all about the brain and its workings (part of their Topic on the Body).  The children shared a lot of information in  both Assemblies in a fun and enjoyable format.  Thank you to all the parents and grandparents who joined us on both occasions.

I will be holding a meeting with parents about the categorisation process and our current school performance  on Thursday 16th February at 6 p.m. in the school hall.  Please do come along for an update on how the school is progressing and our future priority areas.

Have a nice weekend.